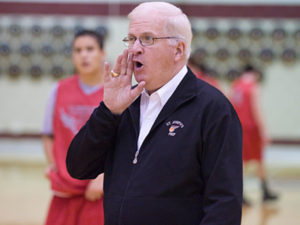 I met my husband Chris years after we both graduated from college and I love hearing his stories from those days. During dinner conversations he often reminisces about playing basketball and running track at La Salle University. He lights up when he talks about the great coaches who have impacted his life. I’m sure many of us can relate. Isn’t it the coaches and teachers we encounter in our youth that leave an imprint on our souls that last a lifetime?

Every so often we receive a letter in the mail from Chris’ basketball coach at La Salle, Bill “Speedy” Morris, a Philadelphia living legend. Speedy’s teams have won thousands of basketball games and he has coached dozens of superstars like Lionel Simmons, Randy Woods, Doug Overton, Rasual Butler, and Tim Legler – just a few of Speedy’s players who made it to the NBA. While all of this sounds impressive, it’s not the wins or the big names that get me – it’s those letters. They’re always handwritten and very personal. As much as I admire my husband, truth be told he wasn’t a superstar on the basketball court; in fact, he was a walk-on who played just one year for La Salle. Yet here he is, getting handwritten notes from Speedy. I often wonder, does Speedy treat everyone who played for him this way?

Recently, I finally met the great Speedy Morris at an event honoring him and his wife for their charitable work. There were a few thousand people in attendance who raised more than $100,000 for The Speedy and Mimi Morris Foundation for Kids. Coach Morris walks gingerly now and talks softly with a scratchy voice that I can only assume has worn out from his over 50 years of coaching from the sidelines. But what wasn’t worn out was that same happy look I saw on my husband’s face when it came to Speedy, and it was plastered on the hundreds of people who waited in line to shake the coach’s hand.

A few days following the event, a letter arrived in the mail. It was another handwritten note from Speedy thanking Chris for coming to the event, thanking him for looking after a good friend of his, and reminding him what Chris meant to La Salle basketball. The letter ended by saying “it was lovely to finally meet your wife Donna.”

It became clear to me why this man made such an impact on Chris and so many others: Speedy has a gift of making everyone – no matter where they are in the line-up – feel like a starter.

In an age that focuses on superstars, top talent and big deals – we hope this story will inspire you to make sure every colleague, client and supplier knows just how important they are to you. If you’re sincere, you may even make someone feel as good as Chris felt sitting at the end of the bench wearing #20…playing for Speedy Morris.

Thanks Coach. It was lovely to finally meet you as well!

Selling to the CEOYou can’t Hack into the EnterpriseIt’s not the People, it’s the System

The views expressed by Donna (Dee) Donato do not represent the opinions or positions of American Express.